In the end of this June UL SPIE Chapter’s members Marta and Ilze went to beautiful Karlsruhe, Germany, to participate in the OSA organized IONS Ka conference.

It all started on the 25th of June - right after the Midsummer’s eve and continued with german traditional Stammtich where all the participants got to know each other.


The first official day of the conference started with the presentation of the organizers of OSKar and Dr. Falk Eilenberger’s speech “Compound eye optics”. After discussions and exchanging ideas the students listened the amazing and inspiring speech of Dr.Gregory Quarles who talked about career success and science.

On the second day all the participants could take part in event “EFFEKTE Science Festival – Look behind the Scenes” organized by Karlsruhe Institute of Technology (KIT). It was full with all kind of scientific inventions. For example, musical band playing at this event consisted of three robots. At the park of the palace of Karlsruhe there were a lot of small workshops where everybody could learn about themes like energy supply, mobility, robotics, nanoworld, virtual realities and many others.
During the conference Karlsruhe was celebrating 300th anniversary. So in the evening all participants could enjoy spectacular light show on facade of the palace of Karlsruhe. 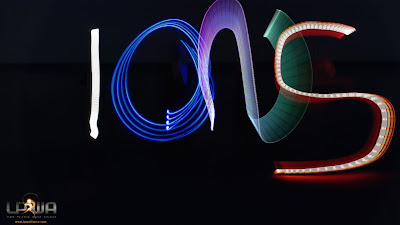 On the third day scientists and students gave some talks and poster presentations about their researches. Our girls performed a speech and a poster. Marta won the third place of the best student talk. Also, during the Chapter session participants and chapter leaders were presenting their events that are being organized during the year in their OSA and SPIE chapters.

After exchanging the ideas and sharing the chapter challenges, the official part of the conference was closed. In the evening all participants were welcome to join barbecue and discuss plans for the future. It ended with demonstration of many national dances from all over the world.

We can proudly present that Marta  was one of the winners of the awards at IONS Karlsruhe 2015, determined by the scientific review committee; she got best talk award.

Last, but not least, fourth day was a trip day. Everyone from the conference could go to Heidelberg and see this beautiful city located on the river bank and explore Innovation lab which is working on the future technology of organic electronics.

Find more on the official website of the IONS conference.

Posted by Bridžitāaa at 7:16 PM